I had my class in Spiritual Direction last night after a two – week break. My fellow classmates and I delighted in greeting each other, many hugs were exchanged and holiday stories shared, though no one quite remembered what topic we were on or what books we should be reading. Holiday planning – both for Thanksgiving and for the nascent Christmas season – has started to mask other brain functions.

On the drive to and from class, my carpool buddy and I reflected on how important the class has been to us in just three short months. Even if we can’t get to all of the reading, the lectures and exercises have been heart-felt, often starting mini journeys of discovery. Our task for next week is to put together a small but emotionally detailed family tree, so over Thanksgiving I asked my parents about their life experiences, their families, my childhood, anything I could think of to help me assemble the mosaic of my personal and familial history.

I learned new things which shocked me. For example, my mother spent eighteen months living in a Japanese internment camp when she was a toddler in the late forties. I never knew! Apparently there was no housing in Cody, WY, where her father had been transferred, so she and her family were sent to live in one of the vacant units at Heart Mountain. The Japanese were no longer there (though there had been over 10,000 inhabitants at the height of the war), but Mom remembered the beautiful gardens they left.

I learned that my paternal grandmother had suffered a nervous breakdown when my father returned from Vietnam. Dad said grandmother was stoic when he enlisted but had convinced herself that he would die "over there". When he walked off the plane, she collapsed. There are other stories of nervous breakdowns on his side of the family and I wonder what they would be called today? Depression, anxiety, manic outbreaks? Occasionally I feel the inherited anxiety leaping forth; in fact, the holidays often act as a starting gun for nerves and tension.

The pieces lie at random on my mental puzzle table, but I’ve almost finished the frame of my personal history and partially filled certain relevant events. Asking and listening with a purpose have helped me to understand how I was created, and how my family and environment helped me to shape myself. As I start to put the pieces together I save one side of the puzzle for the future and feel a freedom to plan a new direction that builds on what I need of the past but leaves the rest behind.
Posted by Laura Dravenstott at 5:38 AM No comments:

My Humorist at Work 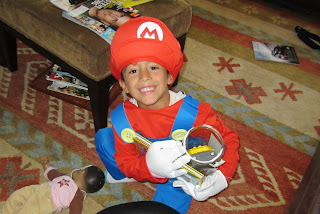 Posted by Laura Dravenstott at 1:28 PM No comments:

The Sound of One (Small) Hand Clapping

“How many pancakes can you fit in a dog house?”
“None, because snakes don't have armpits!”
- Wild laughter.

Kids are hilarious, mostly because they think they are. The wildly creative joke above was derived by my youngest brother when he was of tender age and desperately trying to keep our focus at the dinner table. With four older siblings and two parents at the table, it was a tough go of it, conversationally speaking, and James had to reach (wildly at times) to get everyone to tone down their rhetoric and talk to him.

My sister emailed this joke quite recently to remind us of its humor and longevity. The joke resonated with me because my youngest son performs similar antics to get all of his siblings’ and parents’ senses fixed on him. One of his recent habits (I say recent, though it seems an eternity since he started), is to clap loudly at the dinner table, or in the bathroom – really any small, confined space where the noise shocks me into wide-eyed, upset-stomach, trembling shock. The pint-sized kiddo has hands that fit inside a teacup, but he has perfected his clap until it deafens the unaware. In this respect he takes after my mild-mannered mother, whose loud clapping at basketball games actually provoked my brothers to ask her to “tone it down.” They might not have a genetic link, but she has taught Daniel a thing or two about bringing his palms together.

I should just ignore the noise, I know. But sudden loud noises are detrimental to my mental health and physical well-being, and so I ask him PLEASE to refrain from clapping at the table. He can clap anywhere else (“Except the bathroom, Mom, when you’re there,” he reminds me), and I encourage him to do so. Yet, he unfailing forgets to clap unless I am within a three-foot radius of him, usually carrying something breakable.

Last night he made us laugh so hard that I had to forgive the clapping. While I was reading the last Harry Potter book to Aden and William, Daniel decided enough was enough. Attention needed to turn his way. He rooted around in my swim bag and pulled out my swim caps and two pairs of goggles. He put the black Harvard cap on his head and put the orange triathlon cap on top of that so that he looked like a round-faced rooster. Then he added a pair of super-dark goggles over his eyes and danced a jig around the room. Aden warned me, “Don’t look at him, Mom,” but we all gave in and busted our guts laughing with him.

And lest I forget, my kids have finally solved the riddle: “If a tree falls in the woods and no one is there, does it make a sound?” Their answer, “Of course, because monkeys aren’t deaf.” Didn’t you know?
Posted by Laura Dravenstott at 1:19 PM No comments:

A brilliant full moon tossed on the wave crest of pre-dawn cloud cover. The clouds dimmed the lunar glow and washed over stars just as incoming waves roll and obscure shiny shells, but we still had sufficient light to run on the greenbelt path instead of the street. The 35-degree air was just warm enough to spare us painful inhalations, and as we finished our 3.5 miles the sunrise spread out like a brilliant flag in the east. The morning was off to a glowing start.

The week had brought in many blessings, as a fair tide will bring up shells and stones for collecting. Fall conferences at school brought us good news of the kids' progress and a chance to meet their talented and dedicated teachers. I love teachers; My mother, sister, mother-in-law and sister-in-law are all teachers, and I used to be in that position full-time. Teachers watch over and support our children seven hours, five days a week, and they spend countless hours of their personal time on lesson plans and grading and extra-curricular activities. Teachers are heroes.

The week brought challenges also; two friends who currently have too much to handle. We really do get more than we can take, despite the frequently offered platitude that "God does not give us more than we can handle." There are many problems with that statement: God does not "give" us anything, and yes, people in this world can have too much trouble to bear. It's hard to know a friend suffers, especially when you cannot solve their troubles. I can only offer this lovely quote that I found in my reading this week. It speaks to the one-ness of us all, to our bonds on this gorgeous planet:

So I offer my breath to those who suffer; let me breathe you in, and feel me when you breathe in. We are all here together, inextricably linked. You are not alone.
Posted by Laura Dravenstott at 5:20 AM No comments:

Weddings are not dark events by definition but even so, this was an evening of light. From rays of late afternoon sun which angled through three-story windows onto the stunned face of the groom as he first glimpsed his bride to the candlelight that filtered through the conversation and laughter at our “Steamboat Springs” dinner table, the wedding glowed. Sunlight tickled sparkles in the bride’s gown and hairpiece as her voice trembled on the vows and hot pink candles at the ends of our rows lit the welcoming faces of the guests as the newly married couple took their first walk together down the aisle.

The cocktail hour was full of light-hearted laughter and the clink of glasses. We had not met our drinking companions before but felt like old friends after a wide-ranging conversation about our families and experiences which ended up provoking both tears and laughter. This gift of connection was the first of many gifts the evening held for me and Rob. The house lights went down as we descended the steps to dinner and the tall windows reflected rows upon rows of suspended lanterns. Later, as the mountains faded to black and the dance lights blinked on, the wide panes mirrored a million pinpricks that made it seem as though the Milky Way had spilled onto us.

Dancing provided more luminous moments. The lovely mother of the groom managed to combine elegance with a youthful energy to rival her son’s. She was certainly one of the “dancing queens” of the evening, along with the bride, whose hot pink tennis shoes made a perfect accessory to her strapless dress. When the groom emerged after a lengthy period under that dress with the garter in his mouth, his face matched her shoes and the whites of his eyes glowed with a light I won’t even attempt to describe. I was simply thrilled to dance with my husband without children draped over my arms or legs, or cutting in incessantly. Dancing opportunities have been rare for us over the past ten years so our footloose hours were another great gift.

Other people’s children provided two of the sweetest memories on the dance floor, however; the tiny flower girl twirled, bopped and swayed in her hot pink lace dress and black Mary Jane’s, moving effortlessly about the floor from one group to another. Her tirelessness had me in awe; she didn’t collapse until I did, near the end of the evening. Meanwhile, the slightly more sedate ringbearer drifted off to sleep on the bride’s shoulder as she twirled him about the room, his eyelids falling shut as quickly as high heels came off the bridal party.

At one point I caught up with the groom. “We may not agree on much,’ he said (we have a history of healthy debate), “but we can agree that this is an awesome party.” It was. Guys, thank you for the gifts of joyful energy and connection. We pray they return to you again and again.
Posted by Laura Dravenstott at 5:01 AM 2 comments:

Two Days Ago it Was 70 Degrees! Posted by Laura Dravenstott at 3:38 PM No comments:

With Nana and Papa

With A Tight Streamline!